skip to main | skip to sidebar

Ruby Mae Yocum was born on the 17th of May, 1923 on a farm near McKinney, Kentucky to Lucille Hadley and Page Wolford Yocum. Throughout her life Ruby carried a particular fondness for her home state and her parents' farm. Even though it was the middle of May, it snowed the day Ruby was born. Despite the snow, Ruby's aunt and father were able to pick strawberries, and Ruby's mother always made a strawberry shortcake to celebrate her birthday.

Ruby and her younger sister, Ruth, spent their childhood on the farm. An early influence on Ruby was the great aunt who had raised Ruby's father. At the tender age of 23, Aunt Alice took on the job of raising Page after his mother died during childbirth. Aunt Alice never had children of her own and she remained on the family farm until she died, so she doted on Ruby as if she were her own grandchild. Ruby was a born storyteller with epic recall, and the "Aunt Alice" stories were kept alive in family lore. 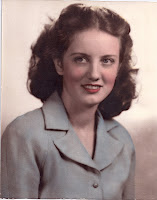 Ruby had many stories regarding the family farm as well. The farm was passed down through her great great grandmother and is still in the family. Ruby had vivid recollections of riding to school in a horse and buggy, taking the corn and wheat to the town mill, and caring for the farm animals. The self-sufficiency of the farm helped temper the effects of the Great Depression for the Yocum family. While it was still a difficult period, the farm provided for them. Ruby remembered that her parents' greatest worry was that their two children would not be able to afford to go to college, a worry that fortunately turned out to be baseless for both daughters.

Ruby attended Berea College, in Berea, Kentucky, where she worked her way through school by teaching. Her first teaching position was in a two-room school where Ruby taught the first four grades. Over the course of her teaching career, Ruby proved herself a versatile teacher, teaching grades spanning preschool through eighth grade.

During World War II, Ruby took a break from Berea College to do fingerprint work for the FBI, since at about one hundred pounds, she wasn't well suited for work as Rosie the Riveter. She was in Washington D.C. from 1944-47, and had vivid memories of the period when President Roosevelt died.

1947 found Ruby back at Berea College where she met her future husband, Hibbard Thatcher, at Berea's annual Christmas Country Dance School. After she finished her studies at Berea, Ruby took a teaching position in Pine Mountain, Kentucky where her teaching skills were quickly and greatly appreciated.

In 1953, Ruby taught at a school in Louisville, Kentucky, where she again met Hibbard at a folk dance gathering. Ruby was very taken with Hibbard from the start, but was unsure how Hibbard felt about her until Hibbard took a job as a social worker with the Louisville Children's Hospital to be near Ruby. In November 1955 Hibbard and Ruby were married in the tiny chapel at the Pine Mountain Settlement School, near Harlan, Kentucky, where Ruby had taught. 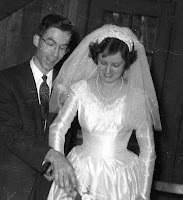 Hibbard and Ruby’s first son, Alan, was born in September 1956, and a few months later the small family moved to Nashville, where Hibbard had enrolled at the University of Tennessee’s Graduate School of Social Work. Hibbard worked on his MSW for the next several years while working full time.

In 1960, Hibbard and Ruby’s second son Jonathan was born. In 1966, the family moved to their home on Battery Lane, with a huge tree-filled yard, perfect for two active boys. Ruby filled their new home with treasures of her own making. She had always had a strong creative side that she used for "practical" things: embroidered pillows, quilts, baskets and pottery. Ruby also had a love and talent for gardening that dated back to her childhood on the farm.

Ruby thoroughly loved her role as mother and doted on her two boys. At the same time, she was also very active in the community, joining Brookmeade Congregational Church where she served on its Board of Deacons for many years. Ruby and Hibbard also joined a folk dance group with mostly young couples doing ‘International’ dancing. Alan and Jonathan often dozed in the corners of church basements while their parents danced the Israeli ‘hora’ or Greek ‘hasapiko.’

After Hibbard’s retirement in 1982, he and Ruby spent several years traveling extensively. They went to Hawaii to visit friends, to China with the Berea College Country Dancers, and twice to Europe and Great Britain with the Nashville Country Dancers.

In 1991, Alan and his wife Diane had their first of three children, and Ruby found a new outlet for her nurturing personality.

In 2001, shortly after visiting Jonathan and his wife Siobhan in California to see her youngest grandchild for the first time, Ruby had a stroke that left her partially disabled. Despite the severity of her stroke and myriad other health problems, she stayed mentally strong and forward looking. Ruby was grateful that she and Hibbard visited California when they did, and she remained adamant that she would recover enough to move back into her house. Ruby was able to move back home, and Hibbard became her primary caregiver until his death in 2006.

In 2007, Ruby moved to California to be near Jonathan and his family. Despite her age and infirmities, Ruby kept socially active until her death, and was out to the doctor and the drugstore the day before she died. She deeply missed the South and stayed in touch with friends and family by phone, email and the many Christmas cards that she sent out each year. Ruby greatly cherished the visits from Nashville friends who came to see her when they were in California. Over the years, Ruby and her sister Ruth maintained a close relationship and called each other every week. One of Ruby's greatest joys was getting together with family at Thanksgiving. Ruby also made new friends of all ages in California, and was a favorite patient of her doctors and physical therapists, so much so that one of her doctors used Ruby as a "test patient" for his UCSF medical students.

On August 31, 2010, at the age of 87, Ruby had a massive stroke that quickly took her life. Jonathan was able to be with her when she died. During the course of her long life, Ruby touched many people in many different ways. Ruby always had a story or a joke to share and a wide circle of friends with which to share it. She will be greatly missed. 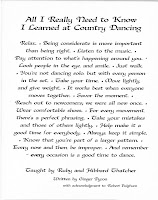 In keeping with Ruby’s wishes, she was interred next to her parents in Stanford, Kentucky. A memorial celebrating Ruby’s life was held on Saturday, October 2, 2010 at Brookmeade Congregational Church, 700 Bresslyn Road, Nashville, Tenn. In lieu of flowers, the family asks that donations be made to Berea College in Ruby’s memory.

As Ruby and Hibbard would say: Remember - every occasion is a good time to dance.
Posted by Jon T. at 11:27 AM

Thank you for sharing Ruby's (and Hibbard's) story. I had the pleasure of knowing Hibbard from Friend's Meeting, and Ruby through Hibbard. They were both lovely people, who made the world a richer place through their presence, and I miss them both.
-Mina Baisch

Condolences on the loss of your mother. She was an accomplished citizen of the world and special friend to many. We will all miss her living friendship but cherish our memories and the influence she had in our lives.
--from John R.

We're sad to hear of Ruby's leaving my birth-state of California, and this planet which was made richer by her years on earth. We've loved her email postings over the past years, as we'd welcomed her gracious hospitality in Nashvile over the previous decades.
--from Jim C.

It's hard to imagine what Nashville would be like without the Nashville Country Dancers. We owe a lot to Ruby and Hibbard for their roles in starting that group and keeping it going. They and the dance group made Nashville feel so much more like home to us!